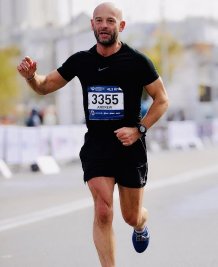 A scientist who has worked with runners including Eliud Kipchoge and Paula Radcliffe is preparing for his own endurance challenge – running his first sub-three-hour marathon at the age of 50.

Professor Andrew Jones, of the University of Exeter, has spent his career researching endurance exercise and advising top coaches and athletes.

His input helped the likes of Kipchoge and Radcliffe smash world records and break barriers many thought were impossible.

Asked how he – or any runner – could apply lessons from elite sport to their own training, Professor Jones said: “The principles are the same but obviously you have to dial it back.

“Eliud runs twice a day and rests in between, but most people probably don’t have the fitness or the time to do that.

“Instead, you should set reasonable ambitions and follow the ‘principle of specificity’ – meaning you do the right sort of training.

“If you’re trying to run a fast 5k or a marathon, the training regimes will be very different.”

Speaking about his research, Professor Jones said: “Over more than 25 years, I have worked to understand how energy is produced, what causes fatigue, and what training and nutrition can help people go faster.”

This work has included researching the benefits of dietary nitrate – now widely consumed in the form of beetroot juice by top athletes in many sports.

Professor Jones first met Paula Radcliffe when she was 18, and worked with her for more than a decade.

His work was integral to Nike’s Breaking 2 and INEOS 1:59 – in which Eliud Kipchoge ran the first ever sub-two-hour marathon.

Asked what Radcliffe – three-time London Marathon winner and women's world marathon record holder from 2003 to 2019 – and Kipchoge have in common, Professor Jones said: “When you meet them, you instantly know they’re special.

“They had a quality, even before they were famous – an unshakable belief in their ability.

“They are, of course, both extremely hard-working and competitive.

“I remember doing treadmill tests with Paula and she worked harder than anyone I’ve ever seen.

“She didn’t want to stop. She would rather fall off the treadmill than quit.

“Choose something you can stick to,” he said.

“You have to be able to maintain it. It’s better to train at 90% effort for a long period than to overdo it and get injured or burn out psychologically.

“In my case, I’ve got my daily training planned all the way from now until the marathon. I like knowing what I need to do, and ticking the box each day once I’ve done it.”

Professor Jones ran at school and county level as a teenager, represented Wales at British schools events and competed in the Youth Olympics, coming fifth in the 10k road race.

He also held the under-18 UK record for both 10k and half-marathon distances.

He wanted to be an Olympic champion, but as this hope faded he focussed more and more on the science of endurance sport.

“When you’ve competed at a high level, it can be hard to compete again, knowing that you’ll never be as fast as you used to be,” Professor Jones said.

“However, in my 40s I felt a new incentive to run. It wasn’t just about performance anymore. I gave myself a clean slate, with more of a focus on health.”

Professor Jones has entered several marathons but has yet to beat his three-hour target.

He never made the starting line of the New York Marathon, pulling out due to injury. In Paris in 2017, he got halfway round before pulling up with injury.

He ran the Sea of Galilee Marathon 18 months ago, but struggled in the heat and finished in 3:34.

In Moscow last September – battling cold weather rather than hot – he just missed his goal, finishing in 3:01.

He then signed up for the Prague Marathon, which was cancelled due to the COVID-19 pandemic.

Now he’s preparing for Amsterdam in October – and says he will run it on his treadmill and record a time even if the race is cancelled.

“Training for a marathon is a huge effort, and I’m sure a lot of people are finding it hard if they think the race may not happen,” he said.

“I try to take enjoyment from the process.

“Just like any training regime – or the race itself – the key is to put one foot in front of the other and forget about the finish line.”

Professor Jones is keen to facilitate others to achieve their training and endurance goals, and is exploring interest in offering a bespoke 1:1 running coaching service. Any enquires can be made to business@exeter.ac.uk.