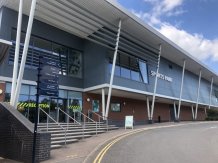 All talented student-athletes within the University of Exeter’s Sport Scholarship Programme benefit from support to ensure they can continue to combine their sporting commitments with their professional and academic ambitions.

University of Exeter Paralympians aiming for glory in Tokyo

University of Exeter Alumna are aiming for glory at the Tokyo Paralympics having combined their studies with international sporting commitments.

Issy Bailey, who studied for an undergraduate degree in English from 2012 until 2016, and then an MA in MA Global Literatures and Cultures from 2018 until 2021 is part of the Great Britain Paralympic team. She will be competing in the Women’s 10m Air Pistol and mixed 25m pistol SH1. This will be Issy’s second Paralympic Games, having made her Paralympic debut at Rio 2016, two years after joining the Shooting Para sport squad.

Issy was introduced to pistol shooting as part of her rehabilitation at Stoke Mandeville hospital after being injured in a car crash in 2013. The GB team trained at the sports centre attached to the rehabilitation unit and the GB coach recognised her natural ability.

Also in Tokyo is cyclist Crystal Lane-Wright, who completed a BSc in Exercise and Sport Sciences at the University of Exeter from 2008 to 2011. She has already won a silver medal in the Women’s C5 Individual Pursuit, and will compete in the C5 Time Trial and C4-5 Road Race.

Crystal, who was born with an under-developed left hand, was inspired to get involved in para sport by the Beijing 2008 Paralympics, and by December 2010 was part of the Great Britain Cycling Team. At Rio she won pursuit silver on the track and road race bronze.

All talented student-athletes within the University of Exeter’s Sport Scholarship Programme benefit from support to ensure they can continue to combine their sporting commitments with their professional and academic ambitions. They compete in a variety of sports including kayaking, hockey, rugby netball and triathlon, as well as a range of other sports.

This programme offers three separate awards for students studying at the University of Exeter, with the primary Sports Scholarship Award being given to athletes who compete internationally in one of eight performance sports - cricket, golf, hockey, women’s lacrosse, netball, rugby, sailing and tennis. National level athletes within these sports can be provided with a Partnership Bursary.

The third award is the Sport Performance Bursary for those competing at an international level in an Olympic or Commonwealth recognised sport.

Whilst supporting individuals across a variety of sports, the University of Exeter is one of only two Talented Athlete Scholarship Scheme (TASS) Centres in the country for the RYA, the national governing body for sailing. This means students within their international sailing teams receive sports training from the RYA, but services in sports psychology, physiotherapy, strength and conditioning and nutrition at the University of Exeter.

Alison Davidson, Director of Sport and Grounds said: “We work really hard to help talented athletes combine their training programmes around often full-time academic study. This involves mentoring our athletes to highlight and enhance their dual-career skills and manage demands where appropriate, so they can think about meeting course deadlines and give competing their all.

“Our number one priority is that all our talented student-athletes get a good degree, whilst being able to develop their sporting skills and achievements. We are so proud of our athletes who achieve so much in sport and elsewhere at the University of Exeter, and we wish our alumna all the very best in Tokyo.”

The Sport Scholarship Programme is backed by local and national sponsors and alumni, who support individual scholarships and bursaries.