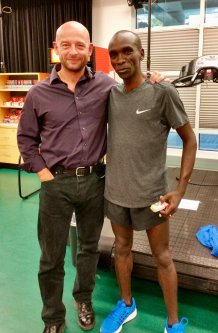 Exeter scientists and alumni spearheaded the science behind Nike’s moonshot to achieve the first sub two-hour marathon, ‘Breaking 2.’ Alongside the world’s greatest minds in engineering, nutrition and materials design, they had a pivotal role in Nike’s vision to condition a specially selected group of athletes to achieve this incredible feat.

On a Saturday morning in May in Monza, Italy, Eliud Kipchoge, Zersenay Tadese and Lelisa Desisa attempted to run a sub two hour marathon. Andy Jones, Professor of Applied Physiology at the University of Exeter acted the scientist and external advisor for Nike’s project. Professor Jones is an international leader in sports performance physiology, particularly in relation to endurance athletics. He has authored more than 230 research articles and is a former international athlete himself. Andy was supported by Dr Anni Vanhatalo, Associate Professor of Exercise Physiology at the University of Exeter, along with PhD student Ida Clark.

The athletes ran 17 and a half times around the track, starting at 5.45am to give the best possible conditions. The athletes were fed frequently during the race, which was one of the many innovations which Exeter scientists introduced to ensure the athletes got the best out of every stride. Andy and his team also worked together to find new ways to allow the athletes to take on more carbohydrates in the form of fluids during the race.

Exeter alumnus Dr Philip Skiba, whose PhD was supervised by Professor Jones, played the role of Medical Doctor and Performance Engineer for the project. Dr Skiba is Director of the Sports Medicine program at Advocate Lutheran General Hospital in Chicago, where he conducts research on oxygen kinetics and the mathematics of athlete training and power production.

Professor Jones directed the selection and specialist testing of 60 of the world’s greatest runners. 18 athletes were chosen to undergo further evaluations in Exeter and the Nike lab in Portland, Oregon. During the tests, Professor Jones considered what conditions would need to be in place to allow the athletes to run a full marathon in less than two hours – the type of course, environmental conditions, clothing, and nutritional requirements.

Although the sub two hour mark was not breached, Kipchoge ran the fastest marathon of any human being – with an average of 4 minutes 35 seconds per mile. Professor Jones commented that “the Breaking 2 project has brought us so much closer to enabling a human being to achieve a sub two hour marathon. The project has shed new light on the physiological mechanisms which occur during this sort of prolonged exercise. The big question my team at Exeter continue to research is how we offset fatigue during exercise.

I am convinced, given current research in this area and innovations which are being implemented in endurance running, that sooner than you might think, an athlete will be able to complete the marathon 25 seconds quicker than Kipchoge was able to.”

Their incredible journey was captured in a feature-length documentary produced by National Geographic, and a special screening of this was organised at the Berlin marathon. The documentary is available to watch on youtube.